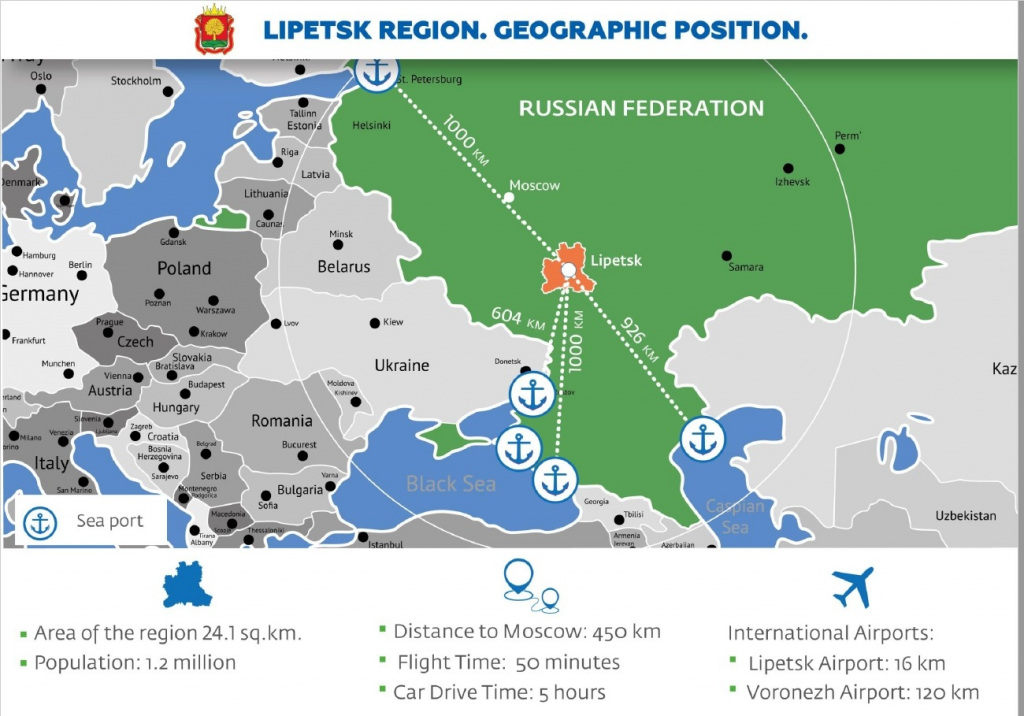 Lipetsk Region is one of the youngest regions of Russia, which celebrated recently its 67th anniversary. Its population is 1.2 million inhabitants. The two main cities of the region are Lipetsk and Yelets, which are large industrial and educational centers with federal universities.

Our region has an advantageous geographical position, situated 450 km to the south of Moscow. Two major federal highways pass through it, as well as the Don River and the Voronezh River.

The largest enterprise in Lipetsk region is the Novolipetsk Metallurgical Plant (NLMK), which produces 30 percent of all Russian steel and steel products. They are exported to 70 countries.

Lipetsk region is one of the largest exporters in the country. In terms of export volume, the region is the 3rd in the Central Federal District, after Moscow and the Moscow Region only. The volume of exports is 4.4 billion USD, and it exceeds the volume of imports by 3 times. Trade relations are maintained with 117 countries.

The Lipetsk region has created an effective system of investment attraction. It consists of federal special economic zone (SEZ) "Lipetsk", as well as 10 regional SEZs. 65 companies from the USA, Germany, Austria, Italy, China etc. has establish their production in the SEZs of the region.

In addition to industry and agriculture, the tourism sector is actively developing in the Lipetsk region. The two main tourist centers are the towns of Yelets and Zadonsk. Yelets was founded in 1146, one year earlier than Moscow. Since 2005 near Yelets a large international festival of historical reconstruction "Rusborg" has been held, dedicated to the early Middle Ages and the "Viking Age". Also in Yelets, the annual cultural and historical festival "Antonovsky Apples" is held, dedicated to the 19th century and the great Russian writer Ivan Bunin, whose life was closely connected with Yelets.

The ancient city of Zadonsk, located on the Don River, is an important center of pilgrim tourism. The amusement park "Kudykina Mountain" located near Zadonsk is very popular, especially among children. The park has a rope town, a large wooden old Russian fortress, a zoo, and a riding school. In winter it offers for visitors ski slopes and ice skating rinks.